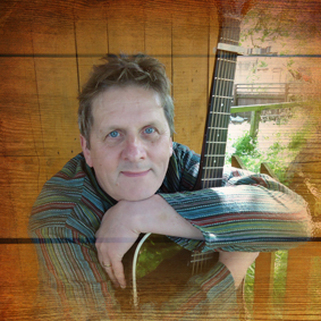 Mike Weaver is a singer-songwriter originally from Cheltenham, but now living in Worcestershire. He is a writer and illustrator by day and an acoustic performer by night, presenting his own melodic songs which draw upon both contemporary and traditional influences.

After a break of over twenty years, Mike returned to songwriting and performing in 2013 . Since his 'come back' he has played at a variety of events across southern England and the Midlands, performing his own solo shows and sharing stages for 'Folk Trebles' with many artists from the contemporary scene, including Daria Kulesh, Kim Lowings, Colin Pitts and Town Musicians of Bremen.

Mike's CD 'The Others' was launched in early 2016, and tracks from it received radio play on folk music stations in the UK, USA, Canada and Australia. A single from the album, 'Pembrokeshire Fair', was included on Acoustic Magazine's cover CD in May 2016.

In both January 2019  and September 2020, Mike topped the Reverbnation UK Folk Charts, and has been ranked as high as fifteenth in the global listings.

Mike's 2019 release 'A Moment In Time'  is a collection of tunes and songs which reflect upon childhood, the ageing process and indelible memories of life and love. Numerous tracks from the CD have featured on UK, Irish, Amercian and Canadian digital channels, as well as BBC local radio stations in the Midlands and West of England.

Mike also appeared live on various folk and roots music radio shows in the English Midlands and West Country, playing tracks from the album and talking about the stories which inspired them.

His first studio album, 'To Soon It's Time To Fly,' was recorded at Polyphonic in Stroud by Lukas Drinkwater, who also features on the record. It was released on Tuesday 1st September 2020, and features two brand new tracks as well as new arrangements of four of Mike's popular songs. 'Chasing Squirrels' and 'Century Caught' from this 'mini-album/plus-size EP' were featured on the BBC Sounds App.  Further recordings from Mike's back catalogue were made at the same studio in the summer of 2022, and a retrospective full album 'The Greyest Bits' was released to coincide with Mike's 65th birthday in February 2023.  A single from the album 'From Here To Afirca' (featuring Katie Grace Harris) , was pressed in October 2022, and played by BBC Local Radio as well as several digital follk stations.

Albums are available for download from iTunes, Bandcamp mikeweaver.bandcamp.com ﻿and other digital music platforms. CDs can also be ordered via The MW Store on this website, including a limited number of older CDs which are no longer commerically available.  Live clips of Mike's performances can be viewed on the Hear My Music page.

"Too Soon It’s Time To Fly has six tracks all written and performed by Mike  Weaver with assistance from Lukas Drinkwater. The songs are in the folk genre and all of which are a delight to listen to. Ranging from the playful to the poignant and covering aspects of his life, seasons and nature all set to some wonderful lyrics, it’s all there. The one exception is ‘Heart of Reunion’ which is a beautiful instrumental; just sit back and let the music take your mind to wherever you wish it to go.

This album is a treat for the senses so make sure you grab a copy. " - Brian Inglis, Jelli Records, August 2020

"Opening for O'Hooley & Tidow was  Mike Weaver ,who beautifully set the scene for our forthcoming delights early on pricking our tear-ducts with a poignant tale of a dying dog (Chasing Squirrels ). He, like the main act, gave us touching songs of daily life from a daughter leaving for university to memories of his family Summer holidays in West Wales (Pembrokeshire Fair), all finely accompanied by Mike’s skilful guitar playing."  - Nick Smith, Downend Voice, April 2019

“Mike Weaver says 'Gather I Must' came from a bed-time story he told his children. Not sure I would fall asleep after such a lovely song!” - Sleeve notes, 'Hello Life' CD, recorded at Mitcheldean Folk Festival July 2017

"Telling stories and reflecting on times gone by and people no longer with us, Mike demonstrated his heart and soul in his ‘Pembrokeshire Fair’, he echoed spirituality in his ‘From Here to Africa’ and brought this all together in ‘Gather I Must’ to close a set which exuded beautiful harmonies, clear storytelling and a passion for people. "- Shelley Peterson, Frenchay Village Hall Folk Club Review, October 2016

"Mike Weaver's  latest album, The Others (March 2016) is a collection of previously unreleased material, together with the single 'Pembrokeshire Fair.' A fingerstyle guitarist, Mike always records his material live to reflect the directness and simplicity of his gigs, creating a strong focus on the lyrics. "- Acoustic Magazine, May 2016